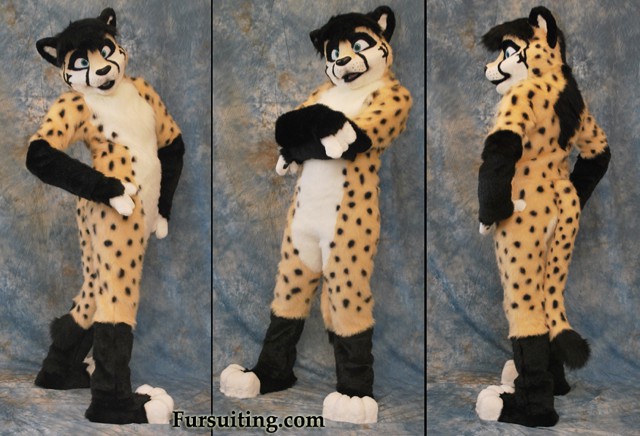 Haven't posted anything over here we've made in ages, so here's our most recent commission built for Tristan Cheetah. :) Suit includes all airbrushed spots and unique tribal markings on both cheeks.

Posted via LiveJournal app for iPhone. 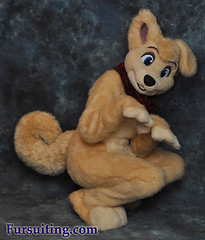 Only 1 day left on this adorable pooch we have up for grabs The reserve has been met, so bid and take her home! :) Full details on the sizing info can be found in the auction, but if you have a question feel free to ask us.

Any questions please use ebay messages or email for the quickest response. :)

This cute canine (built by us) is up for auction. Measurements and auction link listed below. Costume is a personal suit of mine I no longer have the space to keep, she's in excellent condition and has been well cared for.

Measurements the costume will fit:

Any questions feel free to note or email us!

So Megaplex is less than two weeks, who all will I see there? :)

Starting to get excited for the con, and I'll be helping out on a couple panels as well. Unfortunately I won't be able to be there the entire weekend, just Friday afternoon/evening and Saturday most likely, since suit work takes precedence and there are still several to wrap up this month.

As most makers have likewise been experiencing problems with manufacturer delay with fur, so have we to a degree. We were waiting for several bolts to come in after AC, and are still waiting on a couple more shipments although we now finally have most everything back in stock. :) There was a supply issue following the Japan earthquake, Monterey Mills was not receiving the fiber used to make the fur during that time, so certain colors became unavailable. We keep a pretty large stock of fur on hand (an entire room of it, pretty much wall to wall fur on rolls and shelved.) But the main colors we use the most are white/black, these get used somewhere on almost every suit, and they were unavailable for a few months from the manufacturer along with several other commonly used colors. We apologize if there are any delays created from this, but it was a situation pretty much out of anyone's control caused by the disasters in Japan.

I'll also be posting one of our personal suits up for auction soon, just need to put the listing together, and that will most likely be up by tonight. Link and info will be posted here. :)

This morning my Lacybarnett@yahoo and Lacybarnett@gmail accounts were hacked, and a mass email was sent out to all my contacts asking for money to be sent via western union to the UK.

This email is NOT from us. We are not stranded in the UK, please ignore this email.

Good news is we have both the email accounts back already, should be secured this time and I'm keeping my fingers crossed it never happens again.


As a general heads up, we would never mass email all of our contacts and ask for help even if we were stranded. We have our family and even close friends that we would contact directly if a situation like that arose. So in case this ever happens again, please keep in mind we would never ask for help in a mass email.

A few of you have asked me if we will be doing a photoshoot of our work this year, and yes, we will be! :) Now that I have a better idea of the schedule and what's up, here's the info:

Fursuiting.com / Fursuits by Lacy & Nick Photoshoot will immediately follow the fursuit parade. Look for us as we will both be in suit for the parade and will do the group photo right after.

Time: SATURDAY 2:30 - 3:00 PM - If you are in the parade watch for us in suit, as we'll be hanging around and waiting to gather everyone


Today is going to be spent wrapping up a few final touches on suits, and then we'll work on getting photos later today of all the new suits. We'll be posting those up after the con.

I'm excited, we'll see all of you going to FWA very soon! :D

With FWA about a week away for us, thought I'd post a little update with what is going on. :)

We'll be at FWA Thurs-Sun, and we will have a table in the dealer's room this year, so feel free to drop by and say hi. We'll have some fursuit parts for sale, T-shirts, Hoodies, and possibly a couple other things as well.

We'll be taking part in quite a few panels this year, including:

So if we aren't doing a panel, we'll be at our table or running around in suit for the most part.

Several new suits will be debuting at the con, probably won't be posting up any images here until after the con, so if you're there you will see. :D And if you aren't there, you'll still see, just a little bit later. :)

Looking forward to the fun times ahead! Check out the auction here: http://www.furbuy.com/auctions/1021912.html

Any questions feel free to drop me a message or email. :) Really close to actually catching LJ up on all the suits we've made/didn't post yet over here. Still a few more to go after this. I post them more punctually from the time they're actually completed on FA, since it's a bit quicker to handle the submission process and all that, but realize sometimes it's nice to read LJ instead.

So, one is a Lion suit for Hodari. Mane took some extra time, but all in all very pleased with how he turned out. :) And the second head is a version 2/remake for a customer that had his original head stolen/lost, but still had his bodysuit and other parts we had built for him. Same design, just in our more updated style/look from the original.

It's Sunday, but doesn't mean a rest day for us, as I'll be working on a head base and Nick should be finishing up some padding on another suit as well. Working on quite a few new things that will be done in time for FWA.

FC was fun, had a great time and a totally new experience selling as a dealer this year. After the con we took a couple days to hang out with friends/go site seeing, and they were gracious enough to let us stay with them, thanks to everyone that made it a lot of fun this year. It went by in a total blur, but in a good way. :)

We'll probably keep doing the dealer thing at least at some cons in the future, going to try to have more to offer at the table. We'll have a table at FWA this year as well. Seems like a great way to talk to people, especially looking forward to AC since even in past years I think we spent more time in the dealers room than in suit. Should be good times!

I still have quite a few suits to post up over here, so to keep it rolling, here's a couple we finished in the last couple months. A small little fox for SkyFox we didn't have a model to fit, so took a couple floor pics to show that it is indeed a full-suit (floor pics are a bit strange, but nonetheless, it shows it exists.) And also a partial for Stryker Wolf, sent off in time for MidFur in Australia, he's quite the brightly colored guy.